Thoughts before the Big Potatoes event on Automation Anxiety.
Firstly, with no negotiation, everyone interested in the topic needs to watch and read Bruce Sterling on Smart City States. We need to understand the money before we look at the technology. Sterling's book on the Internet of Things is good (also widely available as an eBook).
The best summary of 'the future of work' that I've seen is this by Janna Anderson. Quite long, but as brief as it could be, given the breadth of coverage.
The topic of people and technology has been debated for some long time without much resolution, which must say something. Here is Paul Goodman in 1969 - Can technology be humane? 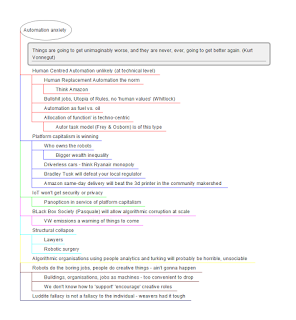 My first thoughts are in the mind map above, and very gloomy they are.
My work has been concerned with encouraging the adoption of a human centred approach to design and operation, mostly in a technicalcontext . The default approach is human replacement automation, The problems with this have been well-documented at regular intervals, starting with Nehemiah Jordan in 1963, working on SAGE. It is very difficult to shift engineers, their customers, their managers, to a human centred approach. Things are still at the guerilla usability level of warfare, winning small battles slowly. So the Cambrian Explosion of automation coming our way will be annoying and hard to use. We will have micromanagement, BS jobs, etc. Whitlock's very sensible Human Values will continue to be ignored in a transactional economy.
I would contend that platform capitalism, masquerading as the sharing economy , (see here too)  is winning, and that platform cooperativism is not going to catch up, unless a mass of cavalry appears out of the sky. Capital will continue to outperform labour, and hence inequality will grow. Who owns the robots matters a lot, and it isn't looking good for the likes of me.  Your local regulator is going to get crushed.
Secure jobs have gone - join the precariat. The sustainability of professions such as lawyer or surgeon is now under question because of the impact of automation. Maybe one day people will choose to be artisanal surgeons, but the disruption between now and then is going to be a rough ride.
I am aware that Human Resources departments have their limitations, but I fear that people analytics will be worse, and less ethical.
Finally, because of the gloomy nature of my own thoughts, I asked some Scandinavian friends for their views. One working in Norway is up to his eyes in automation / autonomy. His involvement means that the sponsors want a human-centred approach, and his work will deliver this. Not happening in UK/US much, I fear. A Dane with a fairly global perspective sees his industry imbued with some techno-utopian thinking, which it doesn't have the capability to deliver.  A Swede, who was active in Swedish human-centred work is now trying to export this to an Anglo-Saxon economy. She is unsure that the Nordic economies will be able to continue in their human-centred ways and resist the globalisation challenge.