I am currently digesting Gigerenzer's 'heuristics that make us smart', letting my 'tortoise mind' (Guy Claxton) catch up with my reading. Gigerenzer has done the analysis to show that in situations of limited information, our heuristics (often derided as cognitive biases) actually work better than mathematical optimisation. So, I have been updating my knowledge of qualitative decision support to see how to apply smart heuristics.

Car purchase decisions are the classic examples used for decision analysis, decision support tools. Most such tools are based on Multi-Attribute Utility (MAU) theory. An example of a largely qualitative approach to car buying using bcisive is here. As it happens, I am pondering how to replace my Toyota Yaris Verso. Toyota stopped making them, otherwise it would be a non-decision as I love it to bits.

This post is an examination of a qualititative approach to choosing a replacement. I am currently exploring the ecology of the decision, which sounds much better (and more accurate) than 'thematic vagabonding'. 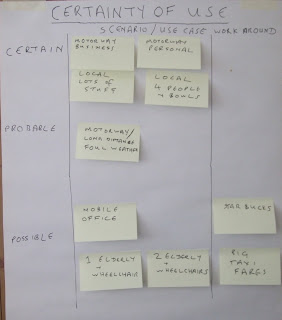 There is considerable irreducible uncertainty in my requirements. It would be difficult to quantify the uncertainty in the requirements, even with tools such as Analytica. There are some requirements that - if they materialise - must be achieved, but I cannot say whether or not they will materialise. It is easy in this situation to confound likelihood with desirability, and to turn unlikely into Nice To Have. In military acquisition, this can lead to buying kit that nearly fits in a Hercules. Think Defence has a good discussion on this in the context of FRES Scout (near the end of the post) "...because at 30 tonnes plus it is neither strategically mobile as a 15 to 20 tonne vehicle would be, or as survivable as a Challenger 2".The problems of 'design by committee'.
In a qualitative approach, the possibility and cost of a work around can be accommodated. 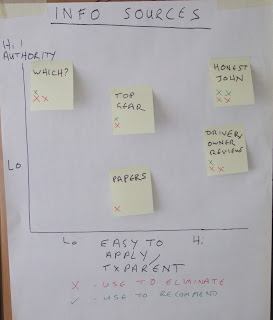 My exploration to date has used Which? magazine, Autotrader, Parker's, Top Gear, and Honest John. These vary in their 'authority' (likelihood of being accurate) and their transparancy (ability to apply the review to my situation). It would be easier to apply the Which? reviews if I could work out what was behind their conclusions and I had access to the user narrative fragments. Perhaps they need to move to Sensemaker. 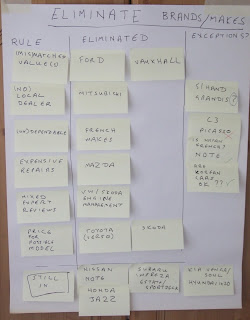 As regards options; the first step appears to be one of elimination - removing potential purchases that I would regret. Some rules emerged from a bottom-up examination of options. The possibility of 'the exception that proves the rule' needs to be considered. There is considerable irreducible uncertainty in the assessment of options - particularly as regards the reliability of non-engine electronics (some cars with good Which? scores have a 1 in 3 chance of a failure when they are 4 years old!). John Robb's wiki is starting a section on resilient autos, but a) they are US vehicles and b) their likely running costs look above my comfort zone. Even in number-intensive military tactical decisions, there is still a need for a compelling narrative, which may be based on the elimination of alternatives.

Elimination gets me down to a short list of cars to sit in at local dealers. In the exploration to date, I have found myself using frequency sampling. For example, the Honda Jazz comes up very often very favourably and never comes up unfavourably, turning it into a reference point or benchmark. The next stage of the process may look quite different to the story so far. We'll have to see.
Posted by BrianSJ at 13:01 2 comments: